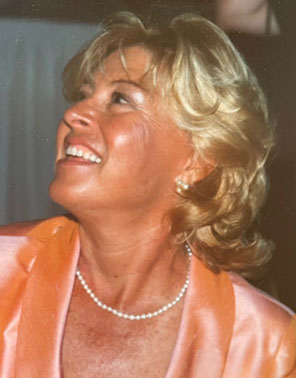 Eileen June Wosoba, 82, passed away peacefully at her home on Sunday, July 31, surrounded by family and caregivers after a 12-year bout with ALS. Eileen endured this disease patiently with a positive spirit in the face of adversity but was never negative or otherwise unpleasant to those around her. A funeral Mass will be held on Aug. 16 at 11 a.m. at St. Maria Goretti Catholic Church in Coal Valley, Ill., followed by a celebration of life for family and friends at the Crow Valley Country Club in Davenport, Iowa, starting at 1 p.m. Cremation rites have been accorded. Memorials may be directed to the ALS Foundation.

Eileen June, the daughter of Walter and Helen Wray Shedeck, was born June 1, 1940, in Oxford Junction, Iowa, the fourth of five sisters and one brother. Eileen graduated from Oxford Junction, Iowa, High School and then attended a business college in Davenport, Iowa. Following graduation, she performed secretarial duties in the Quad Cities, Ill., area, and later in Chicago, she became a personal secretary to a consultant, a former CEO of a large pharmaceutical firm. In 1959, she married John E. Wosoba and from that union came a son, Stephen, and a daughter, Elizabeth.

Upon Eileen’s children completing their education, she became involved in bicycling and later endurance bicycling. Eileen held several offices in the Illinois Quad Cities Bike Club and as its president in 1999. Among her many accomplishments in bicycling: in 1990 she rode non-stop across the state of Iowa in less than 24 hours; in 1993 she qualified for the Paris Brest Paris bike ride and participated in it in 1994; in 2000 she biked across the United States from Everett, Wash., to Gloucester, Mass. (4,200 miles). In 1992 one of her most cherished of several bike trips in Europe was with her daughter and using only panniers and no support, they biked through England, France, Holland and Germany. Eileen also participated in numerous running events including the St. Louis Marathon in 1990 when she placed third in her age group. She loved any adventure that involved physical effort from hiking the Andes to climbing some of Colorado’s fourteeners. She was also an enthusiastic sailor and she and her husband sailed throughout the Caribbean and Florida waters on their sail catamaran, JOLEEN 1.

In 2005, Eileen and her husband built a log home in Pagosa Springs, Colo., which became her adopted state. She was an avid outdoors person participating in hiking, horseback riding on her horse, Hillary, and snow skiing. It was in this great state that she found what she loved most, the great outdoors with no boundaries for fun and adventure. To make sure she got to the highest trailheads, she always drove a Jeep Wrangler with knobby tires and most everyone in the area could tell when Eileen was coming and going.

Eileen was very outgoing with a very pleasant personality who always made a point to seek out others to introduce herself. One example of this that stands out was when she and her “ski girl group” as they called themselves, would take a train from Illinois to Colorado. On these trips, her companions would always remark that before the train got to Nebraska, Eileen knew all the people on the train.

Eileen was an active member in her church as well as in the communities she lived. She served as an extraordinary minister of Holy Communion as well as a lector for many years at St. Maria Goretti Church in Coal Valley, Illinois. In Pagosa Springs, Colo., she was a volunteer at the visitor center for three years and was always a ready volunteer for any civic need.

Eileen was blessed to have some of the finest caregivers that one could have over the past six years, including those with her for five years or more, Kelley Solmonson, Andrea Notorfrancesco and Sandrina Beasley. She was also very fond of her Boston terriers, Mindy and Gypsy, who always remained at her side.