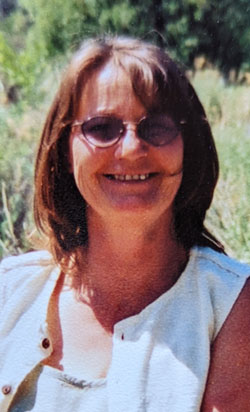 Debbie Ray (Skillett) was born on Dec. 17, 1956, in Idaho, with a heart of fire. She grew up all over the place, eventually ending up in Albuquerque, where she met Rodney. She fell in love with him and they swiftly married, allowing her to joyfully ditch that frying pan of a last name. They moved around a bit before ultimately settling in Pagosa Springs, Colo., where they remained and raised their family.

Debbie loved the mountains, but also loved adventures that didn’t last too long. She always approached every excursion with contagious enthusiasm and great appreciation, but no experience could elicit more joy than any trip to Water World.

Her passion was visible in every aspect of her life. “Determined” is a nice way of saying stubborn as hell, and she was one of the most determined people you might ever know. The word quit was not in her vocabulary. There was nothing she couldn’t do — except sing. Maybe she also needed a little advice when choosing home paint colors, but otherwise, she accomplished everything she put her mind to.

Debbie was a quilter, chef, seamstress, craftswoman, artist, gardener, teacher, writer, huntress, prankster, friend, wife, mother, grandmother, passionate about kids, and a fierce advocate for the underdog. She never stopped learning or taking on challenges for as long as she was able. Then, when she became sick, she fought like a beast until the end.

She was also selfless beyond reason. Debbie spent her days and often nights doing for others. She was known to volunteer to sew all of the costumes or make all of the special snacks. She hosted service events, volunteered for untold fundraisers, provided respite for parents of her school kids, and had an open home for anyone’s children.

Debbie never knew a stranger and never held back an opinion. She was unflinchingly honest, bold and fearless. In her wisdom, she could practically handle everything. There is not another person on earth you would rather have on your side.

Her least favorite phrase was “It is what it is.” Because she believed with all of her heart, “It is what you make it.” She taught her children, grandchildren and many others to boldly be who God made them to be and stand up for what is right all of the time.

On April 18, Debbie marched her way into Heaven. Her laughter will now echo eternally as she embraces family and friends she’s been waiting to see for quite a while. She will be greatly missed by her family and friends back home, along with a zillion pets she never wanted but loved anyway.

Services for Debbie will be held at 2 p.m. on Sunday, May 22, at the Blanco River Group Campground (CCC Campground).