Preliminary information has been released regarding a Monday incident that resulted in an officer discharging his firearm and a wanted suspect.

According to a Tuesday press release from the Pagosa Springs Police Department (PSPD), at approximately 7:48 p.m. on Monday, Oct. 19, a PSPD officer was involved in a shooting near the 200 block of Great West Avenue following a vehicle pursuit.

The suspect driving that vehicle was identified by ACSO deputies as 27-year-old Danny Shahan, of Chromo, both agencies stated.

“Shahan is known to have multiple warrants for his arrest. Shahan refused to comply with the Deputies commands to exit his vehicle and departed the scene of the vehicle stop at a high rate of speed. Shahan’s refusal to stop prompted a vehicle pursuit through the Alpha subdivision, towards downtown Pagosa Springs,” the ACSO release states.

It continues to explain the PSPD responded to the 200 block of Great West Avenue to assist.

“As the suspect vehicle advanced toward the Pagosa Springs police officer and his vehicle, the officer discharged his service weapon,” the PSPD release states.

The ACSO reported that Shahan continued to elude law enforcement for 2.5 miles, at which point the pursuit was terminated.

It continues to explain that, at approximately 9:04 p.m., Archuleta County Combined Dispatch received a call of a vehicle on fire on County Road 500 and County Road 542.

“Upon arrival, Deputies discovered a vehicle matching the description of the vehicle driven by Shahan, crashed along CR 500. At that time the vehicle was determined to be unoccupied,” the ACSO release states.

Shahan is currently wanted, the press release notes, and is described as being a 5-foot-8-inch white male with brown hair and green eyes.

Anyone with information on his whereabouts is asked to contact Archuleta County Combined Dispatch at 731-2160.

Archuleta County Undersheriff Derek Woodman reported Wednesday that Shahan is currently wanted in relation to the following: three misdemeanor failure-to-appear warrants, one for a probation violation and the other two being traffic-related, as well as vehicular eluding and driving after revocation.

The PSPD press release also explains that the officer involved in the shooting has been placed on administrative leave per policy while the incident is under external and administrative investigation.

The ACSO’s release indicates the PSPD and ACSO are working with members of the 6th Judicial District Critical Incident team and the Colorado Bureau of Investigation on the shooting investigation and the crashed vehicle.

“Consistent with protocol, the Pagosa Springs Police Department will not participate in this external, independent investigation,” the PSPD states in reference to the investigation regarding its officer.

The ACSO’s press release states, “The Archuleta County Sheriff’s Office is currently conducting an investigation related to an Officer Involved Shooting that occurred Monday evening, at approximately 7:48 PM, near the 200 Block of Great West Avenue.”

“We ask for the public’s patience and understanding during this critical time. A comprehensive investigation takes time, as we are committed to getting this right for everyone involved,” the PSPD release states, with the ACSO’s release echoing the request for patience. 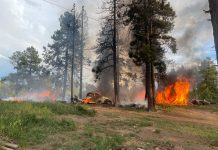 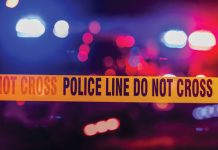 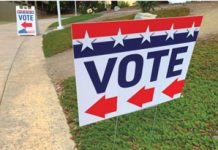