By Charlotte Jones
Veterans for Veterans
of Archuleta County

In honor of the service of Glen Daryl Rayburn, a memorial brick for the Veterans Memorial Park is being purchased by Veterans for Veterans of Archuleta County.

Rayburn served in the U.S. Army during the Vietnam era and was stationed in South Korea. His service and sacrifice for our nation is greatly appreciated.

Do you need all four parts of Medicare for TRICARE for life? 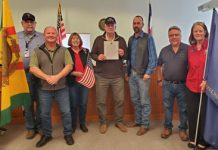