This week’s Bird of the Week, compliments of the Weminuche Audubon Society and Audubon Rockies, is the cedar waxwing.

Silky, sleek and elegant are among the adjectives used to describe this beautiful bird. Both sexes are colored a soft brown on the head and chest, which fades to gray on the rump and wings, and transitions to pale yellow on the belly. A black mask outlined in white, which sits over the eyes and beneath a brown crest of feathers, gives this bird a rakish look.

The “waxwing” in its name describes the red, waxy secretions on the tips of its secondary flight feathers. These colored tips are produced from an accumulation of the carotenoid pigment that gives red fruits their color. The red tips increase in both number and size as a bird ages and are not yet formed in juvenile birds. The yellow color of the terminal band on the tail feathers is likewise produced from pigments in its diet.

Fruits swallowed whole comprise the bulk of this bird’s diet year-round. Cedar berries are a favorite and a wide variety of others are also consumed. Landscaping with ornamental berry trees has in part contributed to an increase in population numbers of these birds. They breed later than other songbirds so that ripened fruits will be available to feed their nestlings.

These highly social birds feed together in flocks and soft, high -pitched calls or whistles between members keep the group together. Instead of competing with each other, a group of cedar waxwings perched on a branch may pass a berry down the line until one bird consumes it.

Stop to appreciate these birds when you come across them. When the berries are gone, so are they.

Previous article
Bishop of Episcopal Church in Colorado to visit St. Patrick’s
Next article
In the blink of an eye 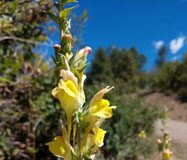