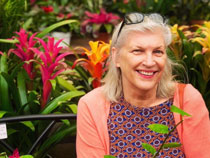 Kimberly Ann Coleman, born March 1, 1953, in Chicago, Ill., died Wednesday, June 1, at her home in Pagosa with her family by her side. She was 69. She is forever loved and missed.

She is survived by her husband of 41 years, Brian W. Smith, and her daughters, Sarah O’Kane Smith, 37, and Emmalynn (Emmy) Coleman Smith, 34, and five dogs and a cat between the three of them.

Kim was a home health and hospice nurse for Mercy Home Health for nearly 25 years; she worked as an OBGYN nurse for many years at Maricopa County Hospital in Phoenix, Ariz., before moving to Pagosa Springs with her family in 1995. She’ll be remembered by countless people for her compassionate care. Brian often returned from the post office or grocery store having just chatted with a Pagosan who called Kim an “angel” for the love and skill she showed a loved one — Brian’s joke was always, “Are we talking about the same Kim?” She is survived by her elder sister Kathleen Mendes and her younger brother Timothy Coleman (who both can attest to the fact that Kim was not, in fact, an angel), and many beloved nieces, nephews and siblings-in-law. She is preceded in death by her mother and father, Dorothy Coleman Edgecombe (nee O’Kane) and James Coleman, and her elder sister Judith Fuller.

Kim was always modest when praised for her work. She knew she wasn’t an angel, that no one is, and she was, like us all, mortal. She knew that the inevitability of death makes life all the more absurd and precious. She had comforted so many people through death at home, but that did not mean she didn’t feel the deep injustice and anger at having to go through the process herself. It was the greatest honor of her family’s lives to be with her at home at the end. Many of her fellow hospice nurses, colleagues and friends, were also with her in her final weeks. She even uttered her last words, a colorful expletive, to her former boss — no recompense for losing her too soon, but fitting all the same.

From her lifetime of helping others both enter this world and leave it, she knew that it was the middle part that counted, and that none of us are ever guaranteed health or wealth in this world, so you’d better help others and love hard while you’re here. She often declared how lucky we are to have food and shelter, and that we did not need birthday/holiday gifts, we would just donate to others — and then she would end up doing both. She was often inscrutable, but she loved widely and indiscriminately. To honor her beautiful soul and memory, please consider donating to Mercy Home Health and Hospice, or to some of the organizations she supported throughout her life: Planned Parenthood, the American Civil Liberties Union (ACLU) and the Humane Society of Pagosa Springs.