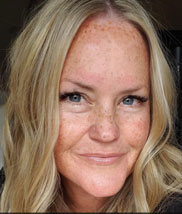 Erin Spring Brown passed away on Wednesday, April 27, at the age of 47. She was born in San Diego, Calif., on March 15, 1975, to Kristi and Gary Brown. After brother Troy was born, the family moved to Seattle, Wash. In 1984, they moved to Pagosa Springs, Colo., where extended family lived. A few years later, the family made one last move to Temecula, Calif., where Erin graduated from high school. Erin’s adventurous spirit moved her to San Diego, Calif. In 2015, Erin moved back to Pagosa Springs with her daughter, Ava, who is Erin’s greatest joy and accomplishment. For the last three years, they made their home in Durango.

Erin loved cooking and sharing her creations with family and friends. Playing board games, hiking, camping, biking and paddleboarding were some of her favorite activities. She will be greatly missed by all and leaves behind a large group of those who loved her, who will continue to support and encourage her daughter, Ava, in both Pagosa Springs and Durango.

Erin is survived by her daughter Ava Brown; parents Kristi and Gary brown; brother Troy Brown, all of Temecula, Calif.; and grandfather Howard Brown. Erin is also survived by her aunts, Heather and Paige Brown, of Washington, and Linda (Stan) Gill; uncles Ken (Shelley) Peterson and Dan Peterson, all of Pagosa Springs, Colo. There are numerous first and second cousins.

Erin is preceded in death by grandparents Joan and Ovie Peterson and grandmother Mary Brown.

A celebration of Erin’s life will be Saturday, May 7, a come-and-go event, from 3 to 6 p.m. at the 11th Street Station in Durango.

A GoFundMe page has been set up to help with funeral, medical and other costs. If you would like to contribute, please go to gofundme.com, Rally for Ava.

The race continues over the Continental Divide