The Americana Project class at Pagosa Springs High School is proud to host The Bo DePeña Band on Wednesday, April 20, at 7 p.m. in the high school auditorium. DePeña will be joined by Americana Project alumna Allora Leonard for several songs, and the students will be opening the show with a 45-minute set.

The Americana Project class was created in 2008/2009. It is an elective class that uses music, performance and creativity to foster self-expression and self-confidence. There is an incredible amount of talent in Pagosa Springs, and this class is another opportunity for students to discover and express that.

Colorado-based songwriter/performer DePeña has developed a reputation as a consummate working musician. Over the years, his high-energy shows have generated a loyal fan base around the mountain west, and it’s clear to see why fans of the country music tradition embrace his songs. From Texas to Colorado to South Dakota to Montana, DePeña’s music can be heard at bars, breweries, rodeos, honky tonks and beyond.

His third release, “It’s About to Get Western,” is a collection of songs about his experiences living in Colorado and touring the West. With inspirations from Marty Robbins, Lefty Frizzell, Buck Owens, Chris Ledoux and Ray Price, this collection of songs ranges from western swing to honky tonk to jazz to folksy ballads. DePeña’s records are “like a box of chocolates” — (you know the rest).

“It’s About to Get Western” was recorded in collaboration with producer/drummer/engineer Gus Alvarado and his band, Western Bling. This Houston-based band is a hyper-talented group of players who are known for entertaining large crowds of two-steppers and waltzers around Houston, Texas. With fiddle and steel guitar leads and a rock-solid rhythm section, this band helped bring DePeña’s vision for a western record to life and the interplay between Alvarado and engineer Brian Baker made this DePeña’s most mature-sounding record to date.

Apart from Western Bling, DePeña hired several guests to enhance the record. “Colorado Rose” was recorded entirely remotely during the early stages of the 2020 pandemic, as was “Second Cup of Coffee.” “If I Let You Go Again,” which was inspired by the early work of Willie Nelson, was redone with the addition of vocals by Ellen Melissa Stor, who also plays fiddle on the record.

DePeña has put many miles under his wheels — and his feet. Not only is he a hardworking entertainer, but his love for the outdoors has been a critical part of his life and career. As a long-distance runner, he has become convinced that being fit and healthy is crucial to putting on a great live performance. Being in shape has given him the energy to play for hours on end. DePeña is also an avid hunter and fisherman, and he is known to disappear into the wilderness for several days during the elk season.

DePeña has shared stages with artists such as William Clark Green, Chris Knight, Dale Watson, William Michael Morgan, Ned LeDoux and Colter Wall. His lyrical content is often universal, evoking memories of past lives, lost loves and a longing for home. This explains why his followers are an eclectic bunch, encompassing many backgrounds, tastes and persuasions. If you are a fan of good stories, good tunes and good vibes, you won’t want to miss this show.

Leonard is a 17-year-old singer/songwriter born and raised on a ranch in south Texas. She will be joining the Bo DePeña Band for some songs.

Her deep soulful vocals are a unique blend of pure country and blues. Combining her love of legendary Texas swing and classic country into a fresh, current sound has created a style that resonates with many generations. A true country girl, when Leonard is not singing, you can find her competing in reined cow horse and ranch horse versatility events. In 2021, she was named National and Reserve World Champion. 2022 started off with her winning the Fort Worth Stockshow Championship. In the fall, her love for the outdoors and wildlife lead her to early-morning hunts with her dad in Texas and Colorado.

“Old Soul Girl,” Leonard’s first EP, was cut in Nashville at the famed Dark Horse Studio. She was blessed to collaborate with Grammy award-winning producer Casey Wasner and Showdog — Universal Music recording artist JT Hodges for this project. Leonard wrote and co-wrote five of the six songs on the EP. Her wide range of musical influence is showcased with songs ranging from upbeat ‘90s-style country to soulful blues ballads.

With over 150 performances completed in 2021, her schedule is quickly filling in 2022. Leonard is gracing stages from Texas to Colorado. Texas has inspired her creative energy resulting in lots of new material for the next project which was completed in November 2021. All of the great energy surrounding her is setting things up for an exciting future as we look for her next release in early 2022.

Tickets are $15 for adults and $10 for students, 12 and under are free. The doors open at 6:30 p.m. with general seating. Tickets are only available at the door for cash or check. Donations for the program are also accepted.

Geothermal Greenhouse Partnership serves community with eyes on the future

Thanksgiving gratitude to all who help us serve you 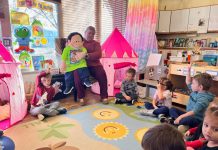