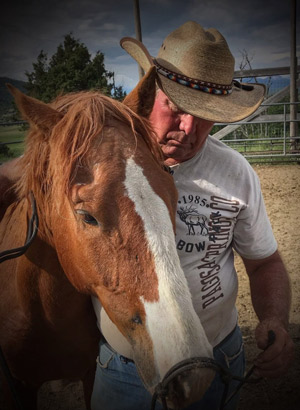 Adrian Vaughn Daugaard, age 65, of Pagosa Springs, Colo., escaped this world at the crack of stupid (which is a very early morning hour) on Friday, Feb. 11, after an unsuccessful battle with tarantism, clinomania, rhinotillexomania, lumbago, collywobbles, hypertrichosis, boanthropy, parosmia, proctalgia fugax and finally cancer. Any or all of this may or may not have been contributed to a possible alien abduction at one time, but none of this has been confirmed. He was surrounded by his children, grandchildren and friends who are now currently — being tested for anything.

For those of you that did not sneak into Harvard medical school or have a dictionary handy: He suffered from an impulse to dance despite wanting to stay in bed all the time in his final weeks. The doctors confirmed the urge to pick his nose, lower back pain and the occasional stomachache. Furthermore, he was very hairy which contributed to him believing he was a cow and ironically had a bad sense of smell. It was strongly suggested that he was also or had a pain in the arse, and finally he was diagnosed with cancer for which we hope you didn’t need a dictionary for.

*Note to reader: His children would like to clarify that he did not actually think he was a cow or that he picked his nose (other than when necessary). The rest is up for debate, but the cancer was very, very real. They also hope you did not harm yourself trying to pronounce any of which was in the earlier paragraph.

Adrian was born waayyyy back on Jan. 18, 1957, and just like most of us Pagosans, he was born in Durango, Colo. The difference was that his parents were the late Mary Margaret Archuleta Daugaard and David Abraham Christian Daugaard.

In his early years, Adrian had several interesting career paths, one of which was on an oil rig which gave him the opportunity to dress like one of the “Village People” — orange hat included. He also worked in the mines blowing up rocks and dirt which made way for the railroad in Basalt and Leadville, Colo. This is where he claims he lost his high school ring — the reward for it is still valid. He worked for CDOT and was also a detention officer for the Archuleta County Sheriff’s Office which turned useful later as he knew his way around a jail cell. He eventually gave in to his true calling as a rancher running the Archuleta family ranch.

If he had an online dating profile (which he didn’t), it might say that he was an enthusiastic outdoorsman, hunter and fisherman. He loved to travel to places like Vegas, Hawaii, Puerto Rico and Costa Rico. He enjoyed walking on the beach, boat rides and he even liked snorkeling (except when there were alligators around — he feared those), and having his picture taken pointing at random things — especially in museums.

When he was not traveling, he could always be found at the ranch in dirty jeans and muddy boots chasing those “darn cows” all over his property, hunting or kicking back and fishing with Donald Ray. Upon occasion, he would clean up and “hit the town” and find a dance floor and sweet talk some lucky lady to be his partner. He was one heck of a cook, too. I also need to mention his endless supply of Ski and Bow Rack T-shirts and his ability to end every text message with exclamation points, confusing the recipient of the actual meaning! It’s also known that he was always late for — everything.

He lived life his own way. Some claim it was “The cowboy way.” For others it was “Adrian’s way.” He either liked you or he didn’t; it was black or white. For his children, they are still trying to figure out which one it was or who was his favorite (we know he loved them all).

Adrian was an exceptional father. He was so concerned with his daughters’ safety and to prove this, he purchased taser guns for all of them. He provided a painfully brief demonstration by showing how easily it was to tase oneself by not following the instructions and warning labels provided, once again confusing his left hand with his right hand. We blame being left-handed in this particular situation and, thankfully, that was not inherited.

He taught the girls how to shoot, how to work on the ranch, to fish and to hunt, and more importantly how to curse in Spanish, for which they will be forever grateful.

To his daughters — he left behind a heck of a mess and they have no idea what to do with it all — good luck!

To his grandchildren and all future generations, you will still be cleaning it up and his beloved cat Prissy will most likely still be living three generations from now.

He was a strong and stubborn pillar of the community. Pagosa will be so different now without Adrian. We will miss seeing him and his “wingman” Donald Ray cruising through town looking for — food. “Taco Tuesdays” at the Roadhouse will never be the same and we are not sure if Ramon’s can survive without his patron support.

He was loved and will be missed profoundly.

Adrian is preceded in death by his parents and a brother, Charles Marcel, and too many family members to name here (they are charging us now per word).

To all his cousins and other family members (which there are too many to count), he loved you all.

To his dear friends, the family would love to give their biggest heartfelt thank you. Your love and support have been unwavering through this difficult time.

Cremation will take place at the family’s convenience and as pay stubs allow. His ashes will be kept in an urn until they get tired of having them (or they no longer match the décor) and then will be taken to a spot on the ranch along with his boots.

The funeral will be held whenever they figure out who is paying for it.

Update: March 12 at 10 a.m. at the only Catholic church on Lewis Street.

Anyone wearing red, blue, purple or yellow will not be admitted to the funeral or memorial (to be announced). Anyone wearing camouflage, large cowboy hats and boots are most welcome.

In lieu of flowers and other silly things, please donate to the fund his children created to pay for all this crap and to feed his beloved cat: https://everloved.com/life-of/adrian-daugaard/.

Signed — Anonymous, who suffers from witzelsucht (a rare frontal lobe disorder that causes a person to make puns and jokes at inappropriate moments).