This week’s Bird of the Week, compliments of the Weminuche Audubon Society and Audubon Rockies, is the Steller’s jay.

In our area, this vocal, blue bird is common year-round. Living in coniferous forests of the western mountains, it is found in these habitats from southern Alaska to northern Nicaragua. Regional variations in appearance throughout its range divide the population into 16 subspecies. So far it is the only crested jay regularly found west of the Rocky Mountains, but this may change with the expansion of the territory of the eastern blue jay.

Within the avian world, members of the corvid family, to which the Steller’s jay belongs, are considered to be the most intelligent. This jay is an excellent mimic who screams a convincing red-tailed hawk imitation, perhaps to scare competitors from a food source.

Possessing an incredible spatial memory, it is able to locate food beneath the snow in winter that it stored underground in fall.

Outside of breeding season, these jays live in flocks. Pairs likely mate for life and stay together all year. Their characteristic hopping from branch to branch up a pine and loud calls are identifying traits. The population that lives here have blue bodies, black backs and a black triangular head crest. White markings on the face confer a fierce look.

Likely a part of their success is the wide variety of food sources they utilize. Insects, seeds, nuts, berries, small animals, eggs, nestlings and garbage are all included. At feeders they consume sunflower and small seeds, corn and suet. Peanuts are a real treat.

Named for a German naturalist and explorer and not for its stellar appearance, this bird’s name is often misspelled. 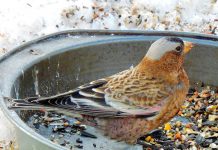