By Darryl Saffer
Special to The PREVIEW

Darryl Saffer and J. Diane Cirksena, of Pagosa Springs, have won a prestigious Award of Excellence for a nature film and an Award of Merit for narration from The Best Shorts Film Competition.

The award was given for Saffer’s artistic creation of his poetic vision of Pagosa Peak as it witnessed the history of the region. “Pagosa is My Name” features the exceptional visuals of the area with Saffer’s original score.

The Best Shorts Competition recognizes film, television, videography and new media professionals who demonstrate exceptional achievement in craft and creativity, and those who produce standout entertainment or contribute to profound social change. Entries are judged by highly qualified professionals in the film and television industry. Information about Best Shorts and a list of recent winners can be found at: www.BestShorts.net.

In winning a Best Shorts Award, Saffer and Cirksena join the ranks of other high-profile winners of this internationally respected award including Academy Award winners and nominees.

In addition to the prestigious Best Shorts Festival, the film has had a very successful season as an official selection at eight other festivals, including awards at the Druk International Film Festival (Bhutan), Global Shorts (USA) and Royal Society of Television and Motion Picture Awards (India).

The film is available at: https://www.youtube.com/watch?v=7QAAww76MrM. 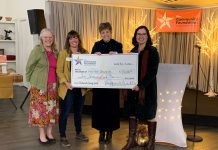 Community Conversation to focus on ‘Closing the Food Gap’