My Sweet Al’s trigger finger is twitching, his good eye is twinkling and I’m shaking my head. Does a man ever get too old, too blind or too crippled to go hunting for that prized elk?

The out-of-state hunters are arriving, hoping to parade a set of antlers around town. Meanwhile, the animals are running to the mountains to avoid any contact with the camouflage clad.

Even my Sweet Al keeps skin in the game. He wears his camouflaged pajamas all year, vacating them long enough for an annual cleaning. Even in his sleep, he is ready for the big hunt.

By day, he can be found pillaging through hunting totes looking for the perfect outfit, something suitable for a crisp fall day. And along the way, he will share a story or two to match his high boots.

As the wife of a hunter, I have my own stories to tell. I have helped my Sweet Al drag out many deer and elk over the years; a bounty for our family’s table. Even our walls are adorned with everything from a wild boar to a grinning bear.

There is nothing in me that finds the pelts that line the gun cabinet attractive. That said, I have gotten used to the many faces and smiles that greet me as I walk upstairs to my office.

In Pagosa, it’s normal. A friend who lives here told me how her husband’s metal gun case is at the end of her bed. She has decorated the gun case by hanging jewelry on it. We have all learned if you can’t move your husband to logic or his gun case out of the bedroom, then you look for ways to dress it up.

How did we end up as the wives of the camouflaged? I was 17 and didn’t see the handwriting or paw prints on the walls. You would think I would have figured a few things out when we were dating. Al carried his favorite J.C. Higgins shotgun with him wherever we went — just in case.

He invited me on a picnic to the Bosque. We traipsed through the tall grass and scared up a bunch of pheasants. He shot a couple and asked me to carry them out. You would have thought I had a wet nose.

He put his jacket around me, took off his socks and put them on my feet. He warmed my heart by being so attentive. I didn’t know he wanted to keep hunting. Talk about cold feet at the altar. I should’ve run, but too late — he had already captured my heart.

He tells the story when he was in junior high. He bought his first gun for $39. Even until today, his old trusty shotgun is still his favorite, something he will not part with anytime soon.

A hunter is born for the hunt, and my Sweet Al is no exception. It didn’t matter if he was at the end of a long day’s work or just out for a leisurely stroll. By the time he walked in the front door, he was covered in feathers and mud.

One day, he walked in the house with the back side of his best suit pants torn wide open. He explained how he saw a covey of dove, climbed a barbwire fence and got stuck. As if a boy on Christmas morning, he held up his prize foul, asked me to cook his dinner, then sew his pants. Something in there was a bit of romance that most old wives find ridiculous. At the time, it was all part of his charm.

Then there was that one time, a story I hate to even relive. We were right in the middle of the season and a great snow storm was moving in. Not one to be discouraged by a few flakes of snow, my Sweet Al headed out the door, gun in tow.

After a day of walking the side of a mountain, he had finally spotted his big shot. It was a prize elk just waiting for the taking. He hit, then tagged his kill. It was getting late so he wrapped his red jacket around the elk so he could locate it the next morning.

By the time he approached the highway, his truck had been towed. He was covered in blood and had frostbite fingers. With a rifle on his shoulder, I’m sure he looked like something out of a scary movie. Hitching a ride was out of the question. He strolled in the front door at 2 a.m., looking the part and beaming with joy.

Up at first light, he was ready to go. “I need help carrying the elk out. Will you go with me?”

I walked by his side as we trudged through the snow to where he had secured his elk. The beauty of the moment came when I remembered walking through the wet marshes of the Bosque, when I carried his pheasants.

Final brushstroke: To the wives of the camouflaged, we know who we are. Just like his favorite shotgun, we won’t part with these hunters of ours. Besides, those worn camouflage pajamas we snuggle with are getting softer and warmer, even if in the grips of sandpaper hands, under the spotlight of trophies that line the walls.

Wild horses deserve a home in the West

How to have poinsettias rebloom in time for Christmas

Save the dates for Lifelong Learning lectures, Restaurant Week and homework help 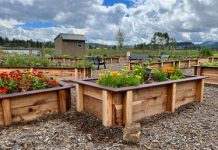