The Motet, Afrobeatniks to play Party in the Park events scheduled for Durango, Pagosa Springs July 30-31

Instead of holding just one signature Party in the Park in 2021, KSUT will hold two such events — on Friday, July 30, in Durango’s Buckley Park and on Saturday, July 31, in Pagosa Springs Town Park.

Both concerts feature The Motet and Afrobeatniks. Tickets are on sale at KSUTPresents.org and cost $30 per day or $50 for two days. Tickets will also be available at the front gate at each concert. Gates will open at 4 p.m. each day, with live music starting at 5:30 p.m. Children 12 and younger are free with a paying adult. Pets are not allowed at either event.

“We invite music fans to celebrate public radio and our diverse blend of music at each of these events,” said KSUT Executive Director Tami Graham. “It’s our way of giving back to the Four Corners and thanking our listeners and members for being part of the KSUT family, especially during the COVID-19 pandemic when we were unable to present live music.”

The two events mark KSUT’s 17th annual Party in the Park, which usually celebrates world music, jazz, funk and New Orleans genres with acts meant to get the crowd dancing. Past performers have included The Iguanas, Shinyribs, Crash Test Dummies, The Subdudes, The Greencards, The New Orleans Suspects, Todo Mundo, The Big Takeover, Baracutanga, The Stooges Brass Band, Jarabe Mexicano and others.

The Parties in the Park will also include food vendors and beer, cider and wine booths. Customers must be 21 years of age or older with a valid ID showing proof of age to purchase alcoholic beverages.

The Motet is a Denver-based band that has blended funk, soul, jazz and world music influences ever since drummer and band leader Dave Watts founded the group in 1998.

The group is a musical collective with a rotating cast of musicians — hence the name “Motet” as opposed to quartet, quintet, sextet and so on. The current incarnation of the group includes Watts, guitarist Ryan Jalbert, bassist Garrett Sayers, keyboardist Joey Porter and saxophonist Drew Sayers.

The lineup is pared down from the Motet’s last several appearances in Durango.

“As the world, and specifically the music world, continues to fundamentally change in the wake of COVID-19, we have also gone through our own changes,” the group noted on its website. “The history of The Motet has always been about change. It’s the one constant.”

The new sound is evident in a new digital single, “False Prophets,” recorded during the live music shutdown.

The Motet has released nine albums in its career and has been regulars at festivals and concert stages across the Four Corners. The group’s four most recent records, 2009’s “Dig Deep,” 2014’s “The Motet,” 2016’s “Totem” and their most recent effort, 2019’s “Death or Devotion,” are regulars on the KSUT Music Blends.

Afrobeatniks are a jazz, Latin and world music group with members based in Mancos and Durango.

They draw their inspiration from popular, folkloric and spiritual music of West Africa, with Brazilian, Afro-Cuban and Latin jazz, reggae, funk and rock influences adding to the musical roux. In particular, the music of Nigerian Afro-pop in the style of Fela Kuti and Tony Allen and the traditional folkloric rhythm structures of Guinea are evident in both original music and spirited covers.

At the two Parties in the Park, Afrobeatniks will be joined by a couple of special guests. Pagosa Springs-based musician and educator Bobby Hemenger will join them on saxophone. Hemenger has performed regionally with the likes of Victor Wooten, Darrell Scott, Peter Rowan, Tony Furtado and many others in recent years. He’s also the host of KSUT’s “Close Enough for Jazz” program, which airs from 7 to 9 p.m. each Sunday night.

Hemenger’s 2016 album, “When Someday Is Now,” mixes jazz and Americana and includes such special guests as Wooten, Scott, Pete Kartsounes and Jonas Grushkin.

Percussionist Fred Simpson will also be joining Afrobeatniks at the Parties in the Park. A traveling and performing percussionist and music instructor from Santa Fe, N.M., Simpson is one of the founding members of Los Primos Melódicos de Santa Fe. Los Melódicos are known for recreating the musical tapestry of Latin America, Cuba and Puerto Rico, as well as jazz, R&B and pop. Simpson performs on such African and Latin instruments as djembe, congas, bongo, cajón and hand percussion.

“In Guinea, West Africa, where some of our rhythmic structures come from, there is a saying that captures the essence of being together in the moment and feeling the joy of music together — ‘Wontanara,’” said Afrobeatniks founder Hoessle. “I think it’s particularly fitting for this current time as we come together for KSUT’s Parties in the Park.”

Like many bands, Afrobeatniks were forced to take a hiatus due to the COVID-19 pandemic. They held their first concert in nearly 16 months on June 16 in Mancos to celebrate the summer solstice.

Afrobeatniks released their debut album, “Wontanara,” in the summer of 2019 just weeks before opening for The Motet at KSUT’s last Party in the Park, which attracted more than 1,000 attendees.

The Party in the Park is among the slate of special events that KSUT’s live music division, KSUT Presents, organizes each year. KSUT Presents also runs two festivals — the Four Corners Folk Festival, which will celebrate its 25th anniversary this coming Labor Day weekend, and Pagosa Folk N’ Bluegrass, which resumes next June after a two-year hiatus due to the pandemic. 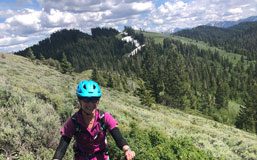