This week’s Bird of the Week, compliments of the Weminuche Audubon Society and Audubon Rockies, is the common yellowthroat.

Unlike many wood warblers, which are found flitting around in the forest, most often this one is found near water. In wren-like movements, it bounces through the thick, tangled vegetation, rarely far above the ground.

Were it not for the male’s distinctive “witchity, witchity, witchity” song, this bird could easily go unnoticed. Inquisitive birds, they will pop out to investigate phishing sounds made by inquisitive birdwatchers. A small, olive-brown bird with a round belly and long tail, the male wears a black mask outlined in white and has a yellow throat and undertail. Females are more plain, but also display the yellow throat and breast.

Common yellowthroats breed across the United States and Canada. Several subspecies are recognized, differing mainly in the facial patterns of the males and the brightness of yellow in the birds. Their songs also display regional differences or accents. In winter, they are found in the southern United States, Mexico and the Caribbean.

Within the tangled vegetation, these warblers nest on or near the ground and are often the victims of nest parasitism by brown-headed cowbirds. They may desert a nest if a cowbird egg is discovered or if their own eggs are damaged, building a second or even third nest on top of the original. In order to hide their young, during feeding, parents zig-zag into the nest and leave by a different route. Snakes, mice, chipmunks, raccoons, skunks and possums are all nest predators.

These birds are commonly found in the brushy habitat at Lake Capote, a birding hot spot owned by the Southern Ute Indian Tribe that is once again open to the public four days per week. 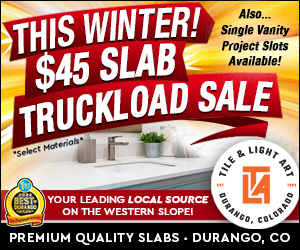