According to a press release from Pagosa Area Water and Sanitation District (PAWSD) District Manager Justin Ramsey, three out of the five local lakes are now completely full.

Last year, total water production was listed at 10.78 million gallons for those dates.

According to the National Integrated Drought Information System (NIDIS), 100 percent of Archuleta County is now in a moderate drought stage.

The NIDIS website notes that under a moderate drought stage dry-land crops may suffer, rangeland growth is stunted, very little hay is available and risk of wildfires may increase.

According to the Colorado Division of Fire Prevention and Control, there are currently no fire restrictions in Archuleta County.

According to the U.S. Geological Survey (USGS), the San Juan River was flowing at a rate of 1,060 cfs in Pagosa Springs as of 3 p.m. on Wednesday, May 26.

Based on 85 years of water records for the site, the average flow rate for this date is 1,470 cfs.

Based on 58 years of water records at this site, the average flow rate for this date is 1,260 cfs.

According to the U.S. Department of Agriculture National Water and Climate Center’s snowpack report, the Wolf Creek summit, at 11,000 feet of elevation, had 12.9 inches of snow water equivalent as of 3 p.m. on May 25.

That amount is 49 percent of the May 26 median for this site.

The average amount of snow water equivalent for this date is 26.1 inches.

The San Miguel, Dolores, Animas and San Juan River basins were at 36 percent of the May 26 median in terms of snowpack. 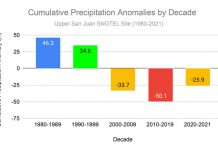 The future of Lake Powell

Water issues will be topic of Democratic Party meeting 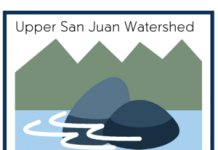