By Richard Gammill
Special to The PREVIEW
On Thursday morning, the telephone rang. My wife, Jan, looked at the caller’s name on the screen and handed the phone to me. We both knew what to expect. “Rich, this is LaRue. Berry’s gone; he passed away on Tuesday. His service is on Saturday. I wanted to make sure you knew.”
The service would be in Aurora, Texas, 650 miles from home, with visitation on Friday evening. When I hung up the phone, Jan said, “You have to be there.” A couple of hours later, I pulled out of the driveway and began my journey.
During two days of driving, I thought about life and death and friendships. Berry and I first met when we were both visiting South Fork in May 2013, where each of us had lived previously. We found that we lived just 50 miles apart in North Texas and were both writers. We quickly became friends, visited each other’s homes and joined each other’s writers’ groups. Until Jan and I moved back to Colorado in September 2014, Berry and I were together at least twice monthly. Even after our move, we continued to critique each other’s writings and encourage each other’s story telling efforts.
Then came Berry’s cancer diagnosis in 2016, followed by months of painful treatments. Despite the ravages of the disease and the debilitating effects of the treatments, Berry refused to give in to complaints or self-pity. He completed a novel and had it self-published. He continued working on a second novel even as he weakened. He and LaRue finally decided to discontinue an experimental round of treatments that cost him his vocal chords and promised only more discomfort.
On Aug. 11, 2018, LaRue wrote an email quoting 2 Timothy 4:7: “I have fought a good fight, I have finished my course, I have kept the faith.”
The letter went on: “Berry is sure and certain that Jesus Christ is all He claims to be, that Heaven exists, that if we are believers, we are forgiven our sins in spite of their magnitude and our being so laggardly in reaching out to take God’s hand… At this point, he’s pretty excited at the prospect of checking out the place Jesus has prepared for him behind the Golden Door …”
As I drove those miles into Texas, I thought about the power of a friendship, even one as short as this one, to make a deep imprint upon life. Berry showed me how a friendship is supposed to work.
The service, in a large rural Baptist church, was subdued but joyous, ending with a rousing rendition of “Swing Down Chariot.”
Following the service, I drove an hour north to the cemetery in Beatrice to attend the burial service. As I drove, I listened live to the vote being taken to affirm the appointment of Brett Kavanaugh to the Supreme Court. Vice President Mike Pence announced the results just as I approached the cemetery. The Senate room was forced to be silent, but chaos erupted in the street outside.
At the graveside, several mourners voiced their appreciation for our departed friend. Quiet love and affection set the tone.
In a polarized political world, angry voices loudly proclaim division and disharmony. In that world, there are friends and there are enemies and they merit different kinds of treatment.
In the Kingdom of Heaven, we seek to obey these words of Jesus: “But to you who are listening I say: Love your enemies, do good to those who hate you, bless those who curse you, pray for those who mistreat you” — Luke 7:27-28 (NIV).
Whether it is toward friends or enemies, it’s the same: love and do good.
My friend, Berry Hawkins, showed me and many others what that means.

Two brothers and the ex factor 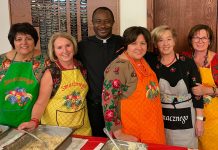 Lamenting lasts and giving thanks