Our Heavenly Father welcomed lifelong Colorado resident Blaine Thomson into His open arms after a lengthy battle with bone cancer and acid reflux disease on Saturday, June 28, in Farmington, N.M., at the Bridge Assisted Living Center. Blaine was 82.

Blaine was born to Archibald “Al” and Geneva Thomson on Nov. 16, 1931, in Durango. He graduated from Pagosa Springs High School with his lifelong love and future wife, Mary. They had been sandbox buddies since the tender age of 2.

Blaine and Mary were married on May 10, 1951, in Pagosa Springs, after graduating from high school in 1950. Both came from registered pioneer families in Colorado, something they were very proud of. The couple had lived in Durango since 1980.

Blaine proudly served his country during the Korean War. He was a longstanding and proud member of both the Masonic Lodge and American Legion.

Blaine worked for the Colorado Department of Transportation for 32 years before retiring in 1989. He had under his command those brave souls that plowed the mountain passes of southwestern Colorado. More than once, he was knocked around by snow slides on Coal Bank and Red Mountain passes. One such slide on Red Mountain is known as Thomson’s Slip in his honor. During his tenure, he lost one man, Terry Kishbaugh, to Riverside Slide on Red Mountain Pass, something that haunted him to the very end.

Blaine and Mary enjoyed nothing more than to explore the four-wheel-drive roads of the Four Corners. They were known for going where they might not technically have been allowed to travel in their Jeep. And, as many may bear witness, there was nothing quite as beautiful as Blaine’s rose garden.

Blaine enjoyed all sports and was a huge fan of all the Colorado teams. He could have opened a sporting good outlet with all of the Bronco memorabilia he collected over the years. Golf was a passion that he enjoyed with his wife, friends and sons up until the very last days. He even told some visitors the week before his passing that they had awakened him when he was having a “very good round.”

Blaine’s greatest loves were that of his family and faith. He and Mary were very active in the Methodist Church and Methodist Thrift Shop.

Nothing pleased him more than to watch his grandchildren and great-grandson growing up. His love for them was measureless.

The family would like to thank the literally hundreds of card senders and visitors of the past few months. It means more to them than they could ever express. This giant teddy bear of a man will be missed by all. It is comforting to know that he is finally at rest with our Lord and Mary now.

A celebration of his life was held at 2 p.m. Wednesday, July 16, at the First United Methodist Church of Durango. 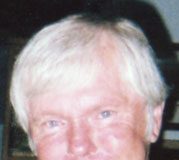