There were so many things to address in this week’s editorial that I opted to give you snippets of some items that deserve being noted:

• Back in the ‘80s, The SUN staff would be thrilled to bring home one or two awards from the Colorado Press Convention. You can imagine how proud I was of our staff last Friday night when we received 49 awards in the categories of advertising, reporting, online, photography and design at the Colorado Press Convention. On top of those 49 honors, we were awarded sweepstakes awards in three out of four divisions. That earned us the overall General Excellence Award given to the top newspaper in our division in the state.

• Congratulations to Pagosa’s own Creede Wiley, who became Pagosa’s 17th state champion wrestler competing in the 3A state championships last weekend at the Pepsi Center in Denver.

• Det. George Barter deserves recognition for a new development in a 32-year-old homicide case. Kudos to George for leading the way to positively identifying John Doe and for bringing peace to his family after all of these years.

• After over nine years serving as the executive director of the Pagosa Springs Area Chamber of Commerce, Mary Jo Coulehan’s last day with the organization is tomorrow. Mary Jo has worked tirelessly to make an impact on our community. She has been a dedicated advocate for businesses and nonprofits and has had Pagosa Country’s best interests at heart. Thankfully, Mary Jo isn’t leaving town, just moving forward in her career as she takes a position with Pagosa Verde, helping to develop geothermal resources in the area.

• As we enter a political season, please remember that, while The SUN prints letters in support of and against ballot issues and candidates, space is limited and, if necessary, no more than two letters will be printed on an issue or candidate in any week’s edition. Letters from candidates will not be printed.

• Please remember when commenting on our website that there are policies. The same goes for letters published in the newspaper. It’s simple … you must agree to be civil. The SUN wants to encourage dialogue and debate that leads to greater understanding. Our goal is to elevate the conversation. This means comments should be relevant and contain no abusive or profane language. Comments may be deleted at the sole discretion of The SUN.  You must also agree not to use this forum for personal attacks. This includes any sort of personal attack — including, but not limited to — the people in our stories, the journalists who create these stories or anyone else in this community.

We need every tool to fight today’s wildfires 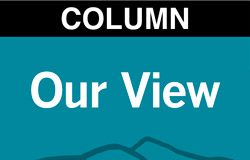