By Muriel Eason
Special to The SUN

The monthly meeting of the Imagine Downtown group will be held at 6 p.m. today, Thursday, May 30, at the Ross Aragon Community Center in the South Conference Room.

The purpose of the group is to put into action Downtown Colorado, Inc.’s (DCI) recommendations to revitalize the downtown area — the heart of the community. Everyone is invited to attend and learn about the progress made on several fronts from a grassroots organization since the DCI visit in November of 2012.

On the agenda for this meeting:

• Update from Downtown Task Force on creating a Downtown Improvement District or other organization to lead downtown revitalization.

• Update from Beautification Group on progress for a proposed mural on the west side of the county courthouse.

• Update from CDC on crowdfunding capability.

Join in the discussion and contribute your ideas on how to make Pagosa a better place.

Snow to intensify tonight as next storm begins 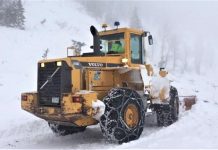