My Sweet Al became the darling in my “Artist’s Lane” column for The SUN newspaper. This character of mine has a mind of his own. When did he happen? It was when frustration set in and I used humor to write about his nonsense. The readers loved him, and I found my niche and voice among my angst.

Fictitious or real, this character is famous. Sweet Al is at the top of the Google list. People recognize him in the grocery store and call him Sweet Al. Older women teehee around him. My male readers are concerned that I’m not taking care of my Sweet Al and his dog, Whiskey. Please, Al and Whiskey get plenty of attention.

My latest angst: I bought two pairs of comfortable shoes, black and brown. This week, Al found my new shoes and was wearing them out to his muddy barn. When I saw them on his feet, I came unglued. He said he didn’t ruin them. He would clean the mud off and they’d be like new again. I sighed. This could be my next article.

We were having dinner with our children when Al salted his food and my food.

Frustrated, I said to my daughter, “Your dad put all that salt on my food. I can’t eat it. Is this what happens when couples live together for years? They no longer have boundaries? They dawdle around in each other’s shoes and eat from each other’s plate? I’m not ready for this next season.”

Years ago, I taught a group of writers how to write humor out of frustration. The most important emotion a character feels is not love, hate, anger or desire. It’s frustration. Without it, there’s no plot. The characters’ response to frustration will create and develop your story.

I asked the writers’ group how they handled their characters’ frustrations. Some said they argued, others got angry, pulled back and sulked. Others threw things. I told them I use humor when I write about this character of mine who frustrates me beyond words.

I met this character when I was 16. Al Slade was at a party. A young girl was crying and he was consoling her. I saw a sweet tender side to him and I was totally attracted to him. I didn’t know he was the one who made her cry.

Apparently, he told her he found a new girlfriend. After he had taken care of his old girlfriend and his new girlfriend, he offered me a ride home. He was 19, good-looking, with a thick head of hair, combed back in a ducktail. He drove a new Plymouth with a wolf-call button on the floor. All I needed was a ride home and he gave me one. A year later, he was mine.

Like any good romance story, the plot starts with infatuation, then love, reality, and ends with endearment. Thank God for humor.

My fictional and real character is getting older. We are moving into our senility years: memory loss, difficulty in concentration, confusion about time and place, and not able to follow a conversation. I believe laughter is still the best emotional escape during these reality and endearment years.

I remember Phyllis Diller and her stand-up comedy routine. She talked about her husband, Fang. I thought she was funny and I questioned if Fang even existed. Was he real or made up? No one had seen him. He stayed in the background. Then we heard they got a divorce. Apparently, humor didn’t relieve their frustration.

At first, people told me my writings reminded them of Irma Bombeck’s writing voice. It was great news. I didn’t know I had a voice and a humorous side. I supposed Irma and I dealt with frustration in the same way.

Bombeck wrote about going on a trip with her husband. He took everything from his closet and packed several suitcases. She took one small suitcase. By the end of the trip, he had transferred his camera and tripod into her small suitcase and she was carrying all of his stuff.

This was my story and it was too close to home. Al has moved all his stuff into my space. Our 50-slot shoe rack, once equally divided, now has become Al’s. I’m still hanging on to five slots and five pairs of shoes. With his shoe fetish, he’s enjoying the rest.

This morning, my daughter said when she saw her dad in his camouflage top and Bronco pajama bottoms, “Isn’t Daddy so cute? I just love him.” I said, “Me, too. But, it all depends on the day and if he’s wearing my shoes or not.”

Final brushstroke: Sixty-two years of marriage have clicked by, 14 years writing about My Sweet Al in the newspaper. I live with my character and write about him. In these last few years together, in the midst of frustration, humor is still the best way to go. I can vouch for him. He is true to his character. 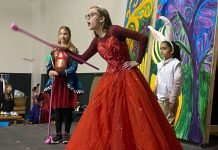 The history and care of poinsettias