“The Addams Family,” a new musical comedy, will be presented at the end of October by Curtains Up Pagosa (CUP).

In case you’re new to town or simply don’t know much about CUP, we thought we’d fill you in.

Here’s what CUP is up to, spelled out in our mission statement: “To nurture, educate, inspire and strengthen Pagosa’s artists through the power of the performing arts, and to entertain our community by providing a superior theatrical experience.”

Who participates in CUP productions?

Pagosa’s students and their families, as well as many other locals who act, sing, dance, build the sets, manage the stage, play in the pit orchestra, sell tickets, distribute posters, create the costumes, do the makeup and lots more.

In short, CUP is indeed a community theater effort and has been for 33 years, starting out as Music Boosters.

In addition to putting on musicals and shows, CUP today offers workshops to students and adults in voice, acting and dance, plus awards college scholarships in the performing arts to graduating seniors at Pagosa Springs High School.

We thought you’d like to hear from one such scholarship awardee who told us about her Pagosa experiences in theater, her college theater experiences and what it has meant to her life.

Meet Randi Andersen Tolme, daughter of Terri and Bruce Andersen, who just retired back to Pagosa. Here’s what we asked Tolme.

How did you become involved in community theater in Pagosa?

“My first show was ‘Fiddler on the Roof’ in eighth grade. I never saw myself on stage but because I loved ‘Fiddler,’ I got into the chorus. I was hooked. I was also in ‘Annie’ that year and got involved in high school musicals starting in ninth grade.”

What appealed to you to become involved?

“It was just fun. I especially loved the singing. When I was in elementary school, before we moved to Pagosa, the school was going to do a play. I wanted to be backstage until they told me I’d have to dance on stage with a tree and be seen. I decided not to do it at all. I genuinely don’t know what possessed me to suddenly try out for a show here in Pagosa (my dad often played in the pit orchestra), but I’m obviously so glad I did. Pretty soon, I started making friends with other kids and that made it even more fun.”

What did you learn?

“That theater is the best team sport. That I’m great at memorizing and that I like singing more than acting. Singing about something can carry so much more emotional impact than just speaking lines. I learned that the way you really get to know people and get involved in something is to work behind the scenes and volunteer for things.”

What shows and performances were you in?

“The summer after my freshman year in college, I came back and showed up at rehearsals for ‘Joseph and the Amazing Technicolor Dreamcoat’ to stand in for the soloists while they were rehearsing other scenes. That was fun because I got to sing all the solos that I never got to sing as part of the chorus.”

Share your favorite memory of theater participation here in Pagosa.

“There are so many. In ‘Meet Me in St. Louis,’ all the women in the cast wore corsets. Even though it was often uncomfortable (sometimes painful), it was fun and exciting to experience dressing from a different era. There was some serious girl bonding going on backstage as we all helped each other in and out of those corsets.

“The ‘Madrigal Dinner’ was really a memorable show. Becca pricking her fingers to pieces every night pinning my skirt to my top, and my hairstyle that looked like Princess Leia buns. The musical experience of singing a cappella in a small group is incomparable to anything else I’ve ever done. I’ve had a soft spot for ‘Madrigals’ ever since.

“I have some very fond memories of set building days, too, and getting to be part of seeing the backdrops and set pieces come together from nothing, knowing I had a hand in making that happen.”

What awards and scholarships did you receive?

“I lettered in music in high school, but after I went to college, they created a letter for theater and gave me one post-graduation. That meant so much to me. I was also granted a scholarship from Music Boosters (now CUP) for college, which also meant a lot to me.”

How did these experiences with theater in Pagosa carry over into college?

“I was so disappointed to find that my college hardly ever did musicals. We did put on ‘Little Shop of Horrors’ in the theater department and ‘Pirates of Penzance’ with the choir, but the two departments had a long-standing rivalry and never worked directly together on things.

“I went to college as a theater major and ended up adding music as a second major because I wanted them to be on equal footing. My senior year, I directed ‘I Love You, You’re Perfect, Now Change.’ I didn’t end up with any music students getting involved, but it was a huge hit and a couple of the cast members ended up joining the choir, so I count it as a win.”

How did being in theater in Pagosa as a student impact your experiences with the Creede Repertory Theatre?

“My school participation in Pagosa definitely gave me the confidence to get involved with Creede Repertory Theatre. I did a couple of summer theater camps and auditioned for their ‘Kids Show.’ I couldn’t get housing in Creede unless I was employed by the theater, so I ended up in the internship program and worked at the box office. I learned a ton about the front of the house, how shows are run from the stage and house management side of things, and about what working in the theater professionally looks like.”

What else do you want to share about your experience with theater as a student and its impact on your life?

“It was hard and sometimes frustrating, not getting the parts I wanted, feeling typecast as a friend/aunt/teacher character instead of any kind of lead. But I wouldn’t trade it for anything. Later, when I started getting small speaking roles, I missed getting to sing and dance in all the big chorus numbers. And in the end, I’m still close with several people I was in shows with, and the kind of solidarity and camaraderie we shared is something I’ve never found anywhere else.”

How have your experiences lined up with Curtains Up’s current mission statement?

“I wasn’t aware of a mission statement back then, but they were definitely doing all of those things. And those experiences definitely did change my life.”

It’s easy to hear in Tolme’s sharing that participation in theater as a student here in Pagosa has impacted her life in many positive ways. CUP is proud to carry on the tradition of Music Boosters by providing life-changing training and experiences to our children, their families and many other Pagosa locals.

Come see our production of “The Addams Family Musical” Oct. 27-30 with five performances — three evening and two matinees. Tickets are available online at www.CurtainsUpPagosa.org, https://our.show/cupaddams and at several local businesses: The Choke Cherry Tree, PS Chocolates, the Chamber of Commerce and at the door. 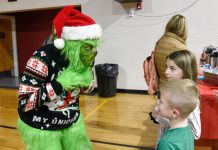 ‘Well, in Whoville they say that the Grinch’s small heart grew three sizes that day!’ 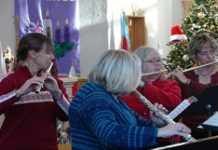 Heralds of Christmas to be performed Dec. 18 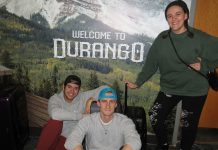