Mark your calendars for an exciting Broadway Gala fundraising event on July 26 at 5 p.m. that will include dinner and a cabaret show featuring the talents of the Thingamajig Theatre Company’s summer musicals cast.

It’s part of an elegant evening at the Pagosa Springs Center for the Arts to raise funds for Pagosa’s only nonprofit professional live theater that also will include a live auction for unique interactions with the actors, live music by the actors, backstage tours conducted by cast members, and a catered sit-down dinner hosted by the actors. There will be a cash bar with tips going to the actors.

Only about half of the costs of Thingamajig productions are covered by ticket sales. The remainder of the theater’s funding comes from private donors, business sponsors, program advertising, grants and proceeds from this annual Broadway Gala fundraiser — the most important event of the year to keep the theater up and running.

Tickets are $250 for this dressy evening and are on sale now on the theater’s website, pagosacenter.org.

The actors are working on their acts for the cabaret concert and their individual contributions to the auction — and keeping them a surprise for now.

A look at a few of past years’ one-of-a-kind auction offerings gives you a good idea of what very special fun will be available this year. They included actors’ serenades at private parties, a brunch with several of the actors, a sunrise hike led by two actors and a personalized cocktail party featuring a drink created just for the winning bidder.

Some of the perennial favorites will be offered again this year. One is a progressive dinner for 10 people where actors chauffeur you and your friends to four incredible locations where you’ll enjoy wine pairings, serenades and delicious food prepared by the cast. Cleanup is included. Another popular auction item is a photo shoot for four where the actors will do your hair and makeup as you enjoy champagne and chocolate, then provide costumes before you pose with the cast for a very special picture that could be your best Christmas card ever. A third is an evening campfire sing-along with the actors.

“We know from previous galas that our guests have been surprised and delighted by the evening’s festivities — and especially the clever and creative auction opportunities,” said Laura Moore, executive director and co-founder of Thingamajig Theatre with her husband, Tim. “We are deeply grateful for everyone’s support because the musicals that folks are seeing on stage this summer would not be possible without the funding raised at the gala.”

This summer’s talented actors, singers, dancers, directors and designers are performing in a blockbuster summer season aptly titled Broadway in the Mountains. Tickets for all the shows are available on the theater’s website at pagosacenter.org — $42 for adults and $25 for kids 12 and under. Evening performances are at 7 p.m. and matinees are at 2 p.m.

The musicals are “Bright Star,” with the bluegrass score composed by Steve Martin and Edie Brickell; “Guys and Dolls,” a romantic comedy involving a high-rolling gambler and a strait-laced missionary; and “SpongeBob the Musical,” a family-friendly show based on the Nickelodeon animated TV series.

“As we begin our 11th year, we are super excited to be presenting these musicals, which represent the best of Broadway from classic to contemporary,” Tim Moore said. “‘Guys and Dolls’ is the iconic romantic comedy that’s on everyone’s favorites list. ‘Bright Star’ is a powerful drama featuring bluegrass music that originated in the Appalachian region of the U.S. ‘SpongeBob’ showcases the latest in technological innovation and spectacle in its staging.”

Tim Moore pointed out that even the settings of the shows are remarkably diverse. “Bright Star” is set in North Carolina in the 1920s and ‘40s. “Guys and Dolls” is set in Damon Runyon’s New York City, with a side trip to Havana, Cuba. “SpongeBob” takes place in the underwater world of Bikini Bottom.

These three musicals are being performed in rotation with five to six shows a week until Aug. 24. All the dates are on the theater’s website.

As well, a special production of “The Music Man KIDS” takes place on Saturday, July 16, and Sunday, July 17, at 1 and 2:30 p.m. This show is the culmination of the Whatchamawhozits Children’s Theatre Summer Camp, in its 11th season this summer.

The camp provides opportunities for youngsters aged 7 to 12 to be taught a multitude of skills from dancing and costume design to storytelling and character development as they interact with the professional actors performing in Thingamajig’s main musicals. They are led by Tyler Price Robinson, the much-admired actor who this summer is playing Nicely-Nicely in “Guys and Dolls.”

Thingamajig is an award-winning professional nonprofit 501(c)(3) theater in residence within the Pagosa Springs Center for the Arts. Its talented actors, directors and designers come from across the U.S. and Canada to produce musicals, comedies and dramas year-round.

The theater was co-founded in 2010 by Tim and Laura Moore, both award-winning actors and directors in their own right.

Their mission is to provide high-quality theater experiences at a low cost to our community, thereby making art accessible as well as providing a major economic driver for our tourist industry. They also provide youth, many of whom are recipients of scholarships, with low-cost, hands-on educational opportunities to see and participate in professional productions of important plays. 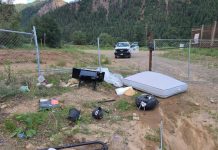 Summer season of Broadway in the Mountains winding down