Anticipating the fight, I didn’t know what I was in for. My grandson didn’t want anyone there except his dad. He said to me, “I don’t want you to watch. I need you home praying for me.”

“I can do that. It might be better.” I told him, “I don’t know if I can watch someone beating on you. I’ve seen boxers after years of being punched. Loopy, cauliflower ears, and a couple of missing teeth replaced with gold ones.”

The image passed in my mind. My grandson could be toothless and dumb in the head.

I envisioned Rocky crying out, “Adrian, Adrian.” My grandson crying, “Grandma, Grandma, are you praying?”

The more we talked about the day, he agreed he wanted the family there. We would make the trip to Buena Vista, Colo., and, yes, the boxing match would become a family event just like he knew it would be.

He said to me, “Grandma, don’t talk to me before the fight. You’ll distract me.”

Sunday night, during our family dinner, the conversation took wings and soared about the world of boxing. How would he match up with the other boxers? This would be his first fight. All I knew was I knew nothing about boxing.

My son-in-law said to me, “You might want to pray for the other guy. You don’t know how hard Creede hits.”

The family knows I have a way of getting too engaged and going over the top, like getting matching T-shirts for the family. A white cape with red, white and blue lettering. Rocky Balboa’s theme song playing and the crowds shouting, “C-dub, C-dub, C-dub” — a name his teammates gave him during his high school football years.

Our grandson was raised in the gym. From ice hockey at 5 years old, football, to wrestling and winning the Colorado state wrestling championship. It’s in his DNA. Built like a linebacker, he knows pain, having competed with a broken foot for two seasons. He played football with a dislocated disc and a list of other injuries. Always in training, always ready to throw punches and always ready to test the boundaries, this was a whole new game.

I told him about his great granddad. “My dad was so strong he’d ride on the tailgate of an old pickup, and with one hand he’d reach down, grab a bale of hay and throw it into the bed of the truck. He’d do it all day and dance all night. People marveled how light he was on his feet.”

Since my family is from Manassa, Colo., we are known for the Manassa Mauler. There is a statue of Dempsey in the center of town. Stories are told about Jack Dempsey and how he was a scrapper and always in fights. It’s our only claim to fame. It’s interesting how stories come full circle.

Like my dad, my grandson has the strength of a bull elephant. He’s, agile, light on his feet and has the mind of a chess player. This is his DNA, this is how he’s wired. When young, his mother would tell him, “Be gentle you’re bigger than the other kids. You don’t want to hurt your friends.”

The afternoon came. No. 20 on the schedule, the last bout of the day, the family was ready. We braced ourselves. He was facing a young man from the House of Pain. His coaches were tee-heeing. Apparently, they knew something we didn’t. He looked mean, tough and they probably witnessed the pain he’d given other opponents.

The announcer announced the contenders.

When the opponent stepped into the ring, we noted how short his arms were. Creede’s reach is extra ordinarily long for his height. I told the family, “I have notoriously long arms, too. Wow! Who would’ve believed my reach would contribute to the fight?” The family looked at me in disbelief. “Mother, it’s not always about you.”

The bell rang. I jumped to my feet. I watched this raging bull come out of the corner and head for my grandson. The red trunks didn’t help either. I thought it was all over when the referee lifted up his fingers and told Creede to count. Stunned, he was still standing, but shaky and delusional. He told the referee he was fine. He didn’t look fine to me.

From the side, you could hear his dad’s voice break through the roar of the crowd. “You’re OK, just get out there and fight. Fight, Creede, fight.”

Creede came off the ropes and plowed into the other guy. Bam! Pop! Thud! Every hit solid, every hit a haymaker. The next thing that happened, the referee held up his fingers and gave the other guy the eight count. Knowing the guy was the favorite to win, my grandson said they wouldn’t give him the match unless he knocked him out. So, knock out he did.

Creede’s left hand came up under the guy’s chin and hit him into the ropes — Creede’s secret weapon. The guy went down and couldn’t get up. They called in the doctor. In one minute and 52 seconds, Creede won his first bout. It was a knockout.

The coaches took off their boxers’ gloves and I thought, “Is it over? I want more.” I asked if I could see the schedule for the next match. I was hooked.

Afterward, Philly Joe, from Philadelphia asked Creede’s mother, “Is he a southpaw?”

“No, but his left hand is as strong as his right.”

The doctor who attended to the guy from The House of Pain said, it was the best fight of the day and he was anxious to see him in the next match. Of course, it was a Kodak moment and there were lots of selfies — after all, it was a family event. 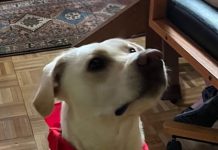 Never hike without this perfect accompaniment

Noxious Weed of the Month: halogeton

‘Growth or no growth?’

How to suspend your holds when you are traveling

The Colorado River has come alive even as it ebbs