This week’s Bird of the Week, compliments of the Weminuche Audubon Society and Audubon Rockies, is the cliff swallow.

Nesting strategy ranges among bird species, from pairs defending a large nesting territory to nesting in colonies of one or more species. Cliff swallows are among the most highly social of all land birds and typically nest in large colonies where nests may touch each other. A Nebraska cliff swallow study spanning more than 40 years has contributed to the understanding of the costs and benefits of coloniality.

Cliff swallows have a dark back and tail, chestnut-colored throat and a pale-colored forehead. Their short, squared off tails help to distinguish them in flight from barn swallows with long, forked tails.

Arriving on their breeding grounds, a pair first chooses a colony to join. They may take over an existing nest or find a vacant space to construct a new one. Using bills to carry mud and form it into balls, they may need to transport between 900 and 1,200 pellets to construct a gourd-shaped nest on a vertical wall with a horizontal overhang. At completion, an adult will sit in the nest entrance and lunge at intruders to hold onto ownership.

Females may lay eggs in each others’ nests and will even carry one of their own eggs in the bill and deposit it in another nest. Colony nesting has been shown to impart an advantage in feeding success. If a feeding parent has been unsuccessful in locating food, it may follow a successful neighbor back to the source it has located. Feeding and preening in groups increases protection against predators.

Originally a western bird, the availability of new nesting sites provided by the construction of bridges, culverts and buildings allowed its range to spread eastward. Cliff swallows now breed across most of North America, traveling as far as southern South America for the winter. Federal protection makes it illegal to harm or interfere with nests during breeding season.

Know the 10 signs: an Alzheimer’s checklist

Wild horses deserve a home in the West 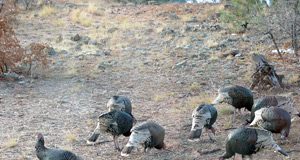