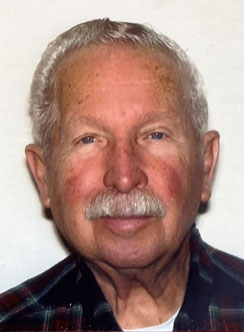 Donald Moody Palmer (Don), 88-1/2, passed away on Feb. 25 at Mercy Hospice House in Durango, Colo. Don was born on Aug. 22, 1933, in Syracuse, N.Y., the oldest son of Moody Edison Palmer and Helen Kelly Palmer. After graduating from Batavia High School in 1952, Don enlisted in the U.S. Air Force during the Korean Conflict (spending two years in Japan). After his honorable discharge, he earned a bachelor’s degree in mechanical engineering from Rochester Institute of Technology (RIT). Upon graduating in 1963, Don was recruited by Aerojet Electro Systems in Azusa, Calif. He enjoyed problem-solving projects and the great outdoors: skiing, camping, hiking, traveling, photography, planting trees and riding motorcycles.

On Dec. 28, 1963, Don married an equally adventurous spirit, Barbara Ruth Palmatier (Barb), and they drove from New York to Monrovia, Calif., carrying skis on the back of their VW Bug and stopping to ski in Colorado. Their two daughters were born in 1965 and 1967 and they enjoyed family time, camping, hiking and skiing with cousins and friends throughout California. In 1977, Don and Barb rode their BMW motorcycle to the International BMW Rally in Colorado Springs. They enjoyed tent camping so much that on their way home, they became enamored with Pagosa Springs and purchased Elk Meadows Campground (The Camp) in 1979.

Don left Aerojet and started working in Los Alamos, N.M., for the Los Alamos Labs (The Lab) in 1980. He drove his 1963 red Plymouth Sport Fury three hours each way every weekend to help Barb manage The Camp and use his yearly season pass at Wolf Creek Ski Area. After retiring from The Lab in 1995, Don and Barb moved to Pagosa Springs and managed The Camp full time. Don loved the San Juan River that flowed along the north side of The Camp, and enjoyed many Palmer family reunions, special events and hosting campers from all over the world there. After more than 20 years, Don and Barb sold The Camp and built their dream home in Pagosa Lakes Ranch, and continued to enjoy riding their motorcycles throughout Colorado. Don enjoyed driving his red Plymouth in several Pagosa Springs parades and car shows in Creede. He was a member of Veterans for Veterans of Archuleta County.

New Thought topic: ‘Zen Your Christmas and Embrace the Joy’

Love is in the air: Adults with disabilities learn the...