Blazy, growing up in Lexington, Ky., became musically inspired when he heard Roger McGuinn playing his Rickenbacker guitar on “Mr. Tamborine Man.” This created a new choice and Blazy traded in his baseball glove for a guitar. He began his musical journey playing with a series of bands all over the eastern half of the country.

By the mid-’70s, Blazy was band leader, playing guitar and touring with Canadian legend Ian Tyson. Sound advice and the timely first-place win in a national songwriting contest persuaded him to move to Nashville in 1980. Blazy’s commitment was now to focus his efforts at the craft of songwriting. It was a very fine decision.

In 1982, sooner than expected, Gary Morris took “Headed for a Heartache” to No. 5 on the charts. In the years that followed, other artists -— such as The Forrester Sisters, T. Graham Brown, Donna Fargo and Moe Bandy — recorded Blazy’s tunes.

In an effort to develop more knowledge of the recording side of music and for the benefits of a “day job,” Blazy opened a home recording studio. The studio offered an option for Blazy’s demos as well as a demo service to other writers. This studio introduced Blazy to some of the new demo singers and songwriters of Nashville: names like Randy Travis, Billy Dean, Trisha Yearwood, Joe Diffie and Martina McBride, now well-known country artists.

In 1987, Blazy was introduced to a new demo singer by Bob Doyle, then with ASCAP, soon to be the manager for this emerging talent, Garth Brooks. Brooks became Blazy’s most-requested demo singer, and Doyle also advised, “Garth writes a little bit, too.”

The first song Brooks and Blazy penned together was “If Tomorrow Never Comes,” which became the first No. 1 song for both. The friendship and writing partnership continued as Brooks included eight more of their songs on his albums. Four more captured the No. 1 slot: “Somewhere Other Than the Night,” “Ain’t Goin’ Down (‘Til the Sun Comes Up),” “It’s Midnight Cinderella” and “She’s Gonna Make It.”

Brook’s newest CD, “The Lost Sessions,” includes another Blazy and Brooks song, “For a Minute There,” written for their fathers. Blazy and fellow songwriter Pat Alger co-produced a CD titled “In the Beginning: A Songwriter’s Tribute to Garth Brooks.”

This project is a collective of six other songwriters who composed songs on Brooks’ first two albums. The focus was to present the songs in the original acoustic and authentic sound form as Brooks first heard them. The CD was originally planned as a gift to Brooks during his 100 million party in 2000. An independent recording label saw the potential and released the CD in 2001, resulting in 50,000+ copies sold to date.

An added benefit of this CD included a tour in Ireland for Blazy and three other Brooks writers. In Ireland, Blazy discovered that “If Tomorrow Never Comes” was released in Europe, Japan, Australia and the United Kingdom by an Irish artist, Ronan Keating. His recording became a successful No. 1 song in many countries.

Blazy’s songwriting continues with established writing partnerships, as well as developing partnerships with new writers and artists. Many of his crafted works continue to be recorded by artists such as Diamond Rio, Kenny Chesney, Terri Clark, Clay Walker, Patty Loveless, Julie Roberts, Andy Griggs and Blaine Larsen, a new recording artist on RCA.

Blazy’s latest No. 1 hit is “Gettin’ You Home (The Black Dress Song),” recorded by Chris Young. Blazy also has the title track on Reba’s latest CD, “All The Women I Am.” It’s also the name of her tour, TV special and her exhibit at the Country Music Hall of Fame. Also, look for Blazy’s latest cuts from Randy Houser, “The Power of a Song” on Houser’s latest CD, and “Empty Beer Cans” on Jon Pardi’s new CD, “Write You A Song.”

The Tennyson Building Event Center will host a special performance by the songwriting legend Aug. 12 from 6 to 9 p.m., Blazy (opened by a talented up-and-comer) will perform an intimate listening concert sure to give goosebumps and laughs as Blazy shares his long history of incredible songwriting. 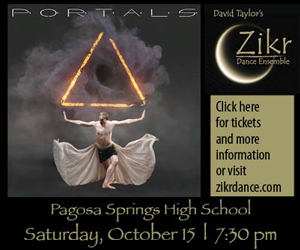 Blessing of the Animals

Dancing with the Pagosa Stars tickets go on sale July 14