By James Pringle
Special to The PREVIEW
Every thunderstorm produces lightning. Lightning is simply a giant spark that moves within the cloud, between the clouds or between the cloud and the ground. As lightning passes through the air, it heats the air rapidly to a temperature of about 50,000 degrees Fahrenheit. This causes a rapid expansion of the air along the lightning channel. This rapid expansion causes a shock wave that we hear as thunder.
Thunderstorms will form if there is sufficient moisture and instability in the atmosphere. As the sun warms the air near the ground, pockets of warmer air begin to rise and cool. Condensation of water vapor causes cumulus clouds to form. Continued heating can cause these cumulus clouds to continue to grow upward into the atmosphere. Towering cumulus clouds may be one of the first indications of a developing thunderstorm. The mature thunderstorm has both an updraft of rising warm air and a downdraft of sinking cool air accompanied by rain and sometimes hail.
Thunderstorms grow tens of thousands of feet into the atmosphere. Within the thunderstorm, precipitation forms as ice crystals, graupel and rain. Collisions between these particles causes electrical charges to separate, with the positively charged ice crystals carried up into the updraft, while the negatively charged heavier graupel are carried downward in the downdraft. With time, the top of the thunderstorm becomes positively charged and the lower part of the thunderstorm becomes negatively charged.
Due to the pool of negative charges in the lower part of the storm, a pool of positive charges will develop along the ground and follow the cloud base like a shadow. Farther away from the cloud base, but under the positively charged anvil, a strong negative charge may be induced along the ground.
Cloud-to-ground lightning can either be a negatively charged flash or a positively charged flash. The negative flash usually occurs between the negative charges in the lower part of the storm and the positive charges on the ground under and near the cloud base. Positive flashes usually occur between the positively charged upper levels of the storm and the negatively charged area on the ground surrounding the storm.
In the negative cloud-to-ground flash, a negatively charged step leader forms and begins to move down toward the ground. As this step leader approaches the ground, streamers of positive charge move upward from the Earth’s surface. When these upward streamers meet the step leader, the connection is completed and the result is a cloud-to-ground lightning flash. The entire process takes place in fractions of a second.
If you are near, or under a thunderstorm, and your hair rises, you are in an area where the positive electrical charges are rising up objects toward the storm. You are in a very dangerous location, because lightning may be about to strike.
The process for a positive flash is similar except that a positive channel usually originates in the anvil of the storm and surges downward. In this case, streamers of negative charge shoot up to meet the positively charged channel as it approaches the ground. When a connection is made, a positive flash of lightning occurs.
While both negative and positive flashes of lightning can be deadly, the positive flashes generally are more destructive as they typically deliver more overall electrical charge to the ground, and they remain in contact with the ground surface for a relatively longer period of time as compared to a negative cloud-to-ground flash.
The best advice in order to minimize your risk of becoming a lightning strike victim is to get indoors into a substantial shelter the second you hear thunder, and to remain there for at least 30 minutes after the last rumble of thunder. In general, “When thunder roars, go indoors.” An enclosed hard-topped automobile is also a very safe place to be during thunderstorms.
NOAA’s lightning website, which contains abundant information on lightning safety, can be found at: www.lightningsafety.noaa.gov.
Lightning information specific for Colorado can be found at: www.weather.gov/pub/lightning.

Red Flag Warning for Tuesday, May 3 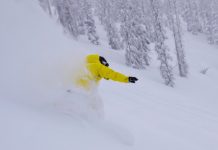 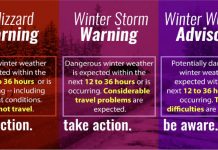 Multiple feet of snow falls over Pagosa Country, more on the way

How much more will it snow?: Winter storm to begin today