By Brian Collabolletta
Special to The SUN
For those of you who remember our last great donut shop, Thomas Hayes was the owner of Daylight Donuts. He was an avid hockey player and fan of the game. A few weeks ago, his widow, Linda Lee, approached the staff at the rink and stated that she wanted to make a donation in her late husband’s honor.
The Pavilion board thought they could do one better and hold a tournament in his memory.
This Saturday and Sunday, the Pagosa Multi Purpose Pavilion presents the inaugural Thomas Hayes Memorial Tournament at the rink in South Pagosa Park.
Games will begin each day at approximately 8 a.m. The format for the tournament will be a three-on-three pond-hockey style. Pond hockey is generally played on a smaller surface than a full-size ice rink and players shoot at 6-foot wide by 6-inch tall goals. It has 1-foot wide openings on each side, encouraging skillful puck placement to score.
Teams will consist of three to six players with no more than three players per team taking the ice at a time. Games will be two 15-minute halves with a brief break in between. Pond hockey rules are much different than regular hockey. There is no goalie, slap shots and checking are not allowed, no offsides, penalties or icing, and you have to pass the puck at least twice before scoring. This type of play leads to fast-pace and exciting action from the teams.
Registration is still open for teams, but space is limited. Free agent single players are encouraged to sign up as there will be space available on teams that are short on players.
Cost is $200 per team or $40 for free agents. Guaranteed at least four games with single-elimination playoffs starting Sunday afternoon.
The championship game will start at approximately 4 p.m. on Sunday. For more information, visit www.skatepagosa.org, or contact Brian at 903-2394 or Jeff at 903-2997.
Come out and enjoy some great local hockey action this weekend. See you at the rink. 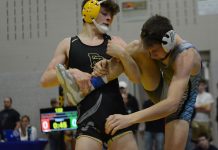 Was it worth fighting over?