As my readership knows, I’m a strong supporter of Pagosa Springs. Ian McCrudden and his Pagosa-based production company, Epiphany Pictures, also feel that strong connection. He has said, “Putting the story and character in the context of actual places makes it more authentic and relatable.”

Therefore, I wanted to attend the local premiere of the movie he wrote and directed. After the movie, I went to bed thinking about “Cowboys*Indians” and woke up hearing my family talking about it. It stirred a lot of reactions, which prompted this review.

Surrealistic artist Salvador Dali said, “If it causes a reaction, then it’s done what it was supposed to do.” I have a feeling everyone who saw this movie had a profound reaction.

The talk around the breakfast table went like this: “I’m glad I went as a Pagosa supporter, but watching the dark side of human nature disturbed me immensely. I don’t think like that and I don’t want that stuff in my mind. I don’t use profanity or appreciate nudity. I knew from the newspaper article it would have a sense of rawness. I just didn’t realize the extent of the rawness.”

Another family member said, “I liked the story premise, but I didn’t like the lighting. It was too dim in places, too hard to see and follow a lot of the action.”

I responded, “I didn’t like that either, but as an artist and novel writer, I understand what Mr. McCrudden was trying to do. It was a dark subject, and he wanted to show it in a lower light value. I wished there had been more of a balance of studio lighting though.”

In the beginning, if he had only shot the fun scene in the trees in a higher light, during a happy, more upbeat time, I think we would have seen what drove the people and the relationship they had for each other. Maybe it was the unresolved tragedy between them that darkened the relationship from the beginning and throughout the story.

A small insight into the character of Twisty, who had a caring spirit, brought a balance to the story line. He showed it in the way he cared for the boy and for the calf. I would have liked to see more redeeming qualities in him, and a richer development of his character.

From the promos prior to the premiere, I was expecting deeper character development. However, this story felt plot-driven to me rather than character-driven. I felt the evolving of characters and relationships could have been stronger.

During the movie, my daughter said, “That was the Billy Goat Bar in Gem Village.”

Finally, when the cop said he was in Pagosa, I thought, now I know where they are. Then I saw the Junction Restaurant and the station and knew where they ended up. But where did they start? They started in different places, but where?

There were little things, like one or two extra times related to cowboys and Indians that wasn’t necessary. The title of the movie was sufficient, but I really liked the little boy playing with the toy figures. That showed an underlying conflict between the two cultures.

The vulgar language and nudity seemed gratuitous, rather than necessary for the storyline and character development.

I think a close-up and clearer shot of the missing person poster would have given the audience a few more details, the boy’s last name, and where he was when he ran away. I couldn’t get a sense of Twisty’s determination to find Angel. I felt the middle of the show lagged a little bit. However, it did keep me engaged all the way through.

At the end, they drove off with an unresolved problem. Development of a relationship between Twisty and Angel with more concrete feelings and actual caring for each other would have been good. Just a look into each other’s eyes, or a stroke of a hand would have done the trick for me. As part of the audience, I wanted a connection between them. It never happened.

When I was asked at the movie theater by one of the cast members if I liked it, I said it was good. I wanted to say more, but I couldn’t. I realized later I needed time to process it. It was a bag of mixed feelings I couldn’t get my head around. I didn’t feel any prejudice against either culture. It was handled very well. That was wise.

The characters were believable. I didn’t feel at any time like they were overacting. The casting of characters was great. I thought the character change from the young Twisty and the older Twisty was very believable. It looked like it could be the same guy.

The length of the movie was perfect. I really liked the photography. The old red truck going down the snowy road and the different scenes were really topnotch. The old beat up blue truck with the rust was believable, especially around this area. The filming was done very professionally. The music score added to the movie. It started out loud, but then it supported the feelings and emotions of the story without competing with or drowning out the dialogue.

I appreciate the introduction of the cast members before the movie and enjoyed the opportunity to meet the cast after the show. I would have liked to have spent time talking with them. The theater was very crowded with another group of people coming for the second showing.

After reading the newspaper article by Dana Hayward, about how McCrudden found Maria Johnson, who played Angel, and that led to a financier and a new way of production, intrigued me. Mr. McCrudden is thinking outside of the box.

He said the new venue of free Internet productions was still iffy and not proven. It takes courage to step into unchartered waters.

My hat’s off to you, Mr. McCrudden. You did it. You made a movie without Hollywood’s A-list and deep pockets. Maria Johnson is beautiful. You’re believable as an old rough cowboy, and Kyle Agnew lent authenticity to his role.

According to other articles, the financer and distributer for this movie agreed on two conditions. First, the movie had to be made for under a quarter-million dollars, and, second, that it premiere and be available for the public to view online free of charge. While the success of the film is up in the air as to this new way of production, what is not up in the air is this being a successful film.

Although it was in a narrow screen format, this film did not feel low budget. This production was as good as any big multimillion dollar production. It should prove to independent filmmakers that they can produce a top film without a lot of money.

In comparison with the multimillion dollar movies, this is how I would rate “Cowboys*Indians,” from one to five stars with five being the highest: character casting 5; acting 5; story line 4; photography 5; filming and editing 5; sounds 4; dialogue 4; filming close-ups 4.

Mr. McCrudden should be very proud of his artistic investment. The filming and editing was superb. I hope he makes more films in this area. From the response of the “Cowboys*Indians” audience, I know he feels the sincere warmth and friendship Pagosa has in its heart for him and his crew. I’m looking forward to seeing his movie The Girl in the Lake also filmed partially in Pagosa.

If you’ve seen the movie, I’d like to know how you would review it. Send your comments to betty@bettyslade.com. 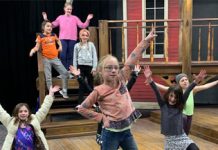 Save the date: Dancing with the Pagosa Stars to benefit Seeds of Learning

She got the job done 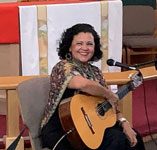 Gabriela de la Paz to return to Pagosa Springs, perform May 7 and May 14 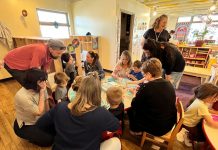 Summer of fun on tap with Thingamajig Theatre Company

‘All Shook Up’ auditions set for this weekend